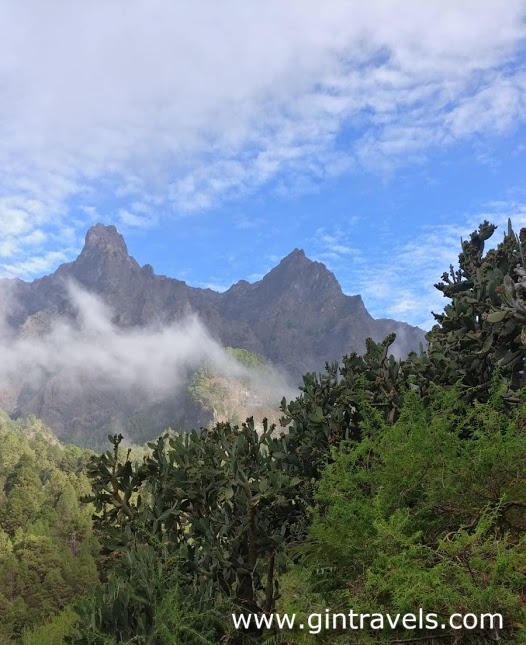 I woke up quite early. As I couldn’t sleep any longer on these stones and spikes falling on my face. It was around 8:30 am when I got up. My back was hurting and felt like somebody was beating me with sticks and stones all night. I could fall asleep properly around 2:00 am when the full Moon has risen and the wind has stopped blowing like crazy.

Nobody slept well because of the wind and hard ground! For breakfast I ate my tuna cans. Gathered all trash to my plastic bag to carry out from La Caldera as there is nowhere to leave the trash. On my way leaving I gathered some figs again from fig tree. They were so sweet! 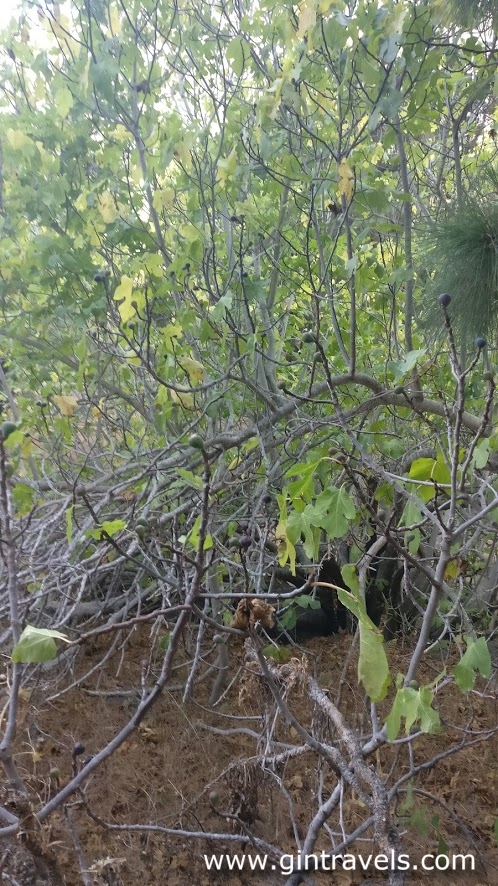 We left through the small gates next to visitor’s centre. They are normally closed if there is a danger of flooding. First view was breath taking. With some cloud in the mountains. 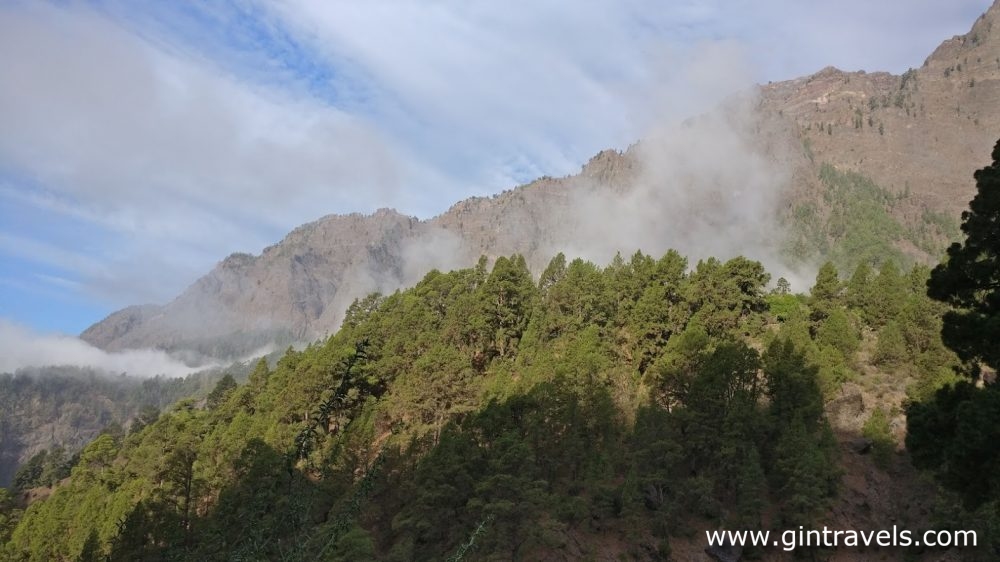 Then passed via arch of cacti, which also looked very interesting. 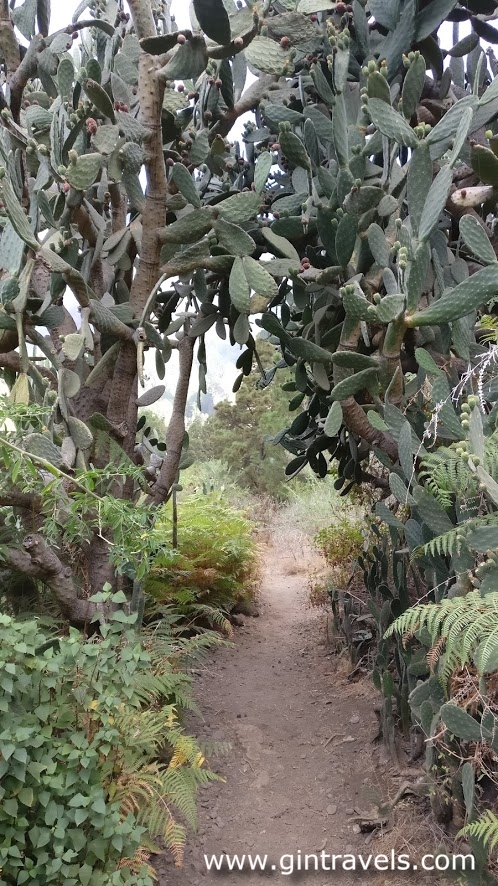 The further we went the more beautiful it got. The sky was so blue with some feather clouds. It looked like Calima is gone. 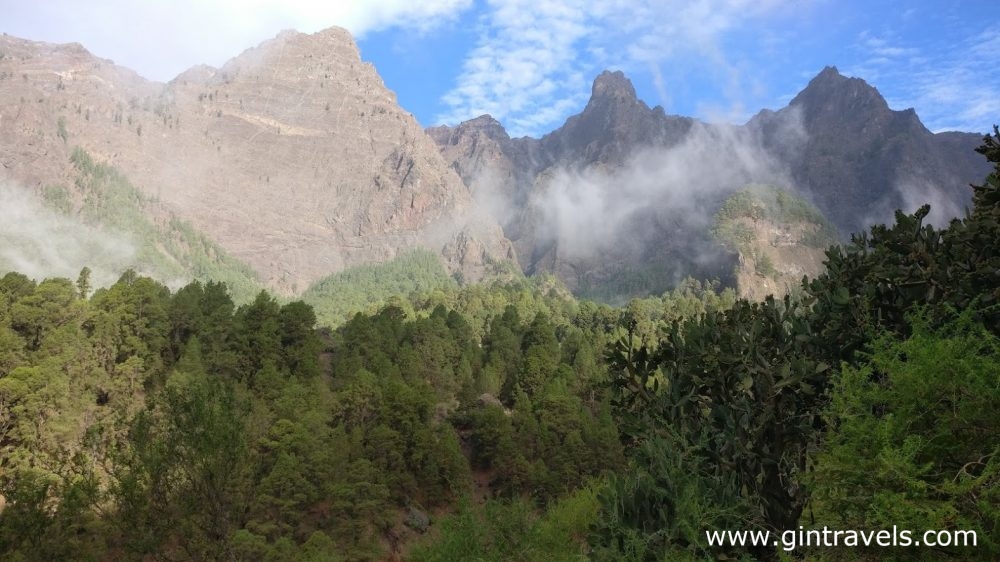 You could see how much down we had to go down to reach the barrancos. 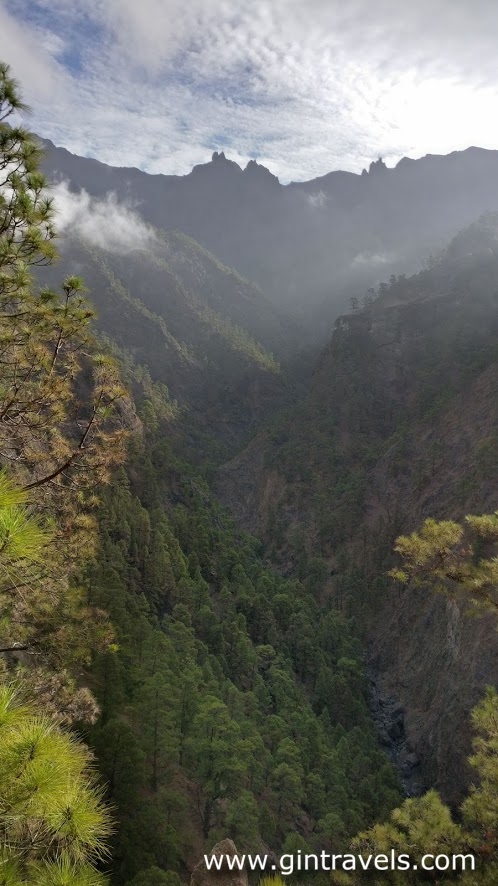 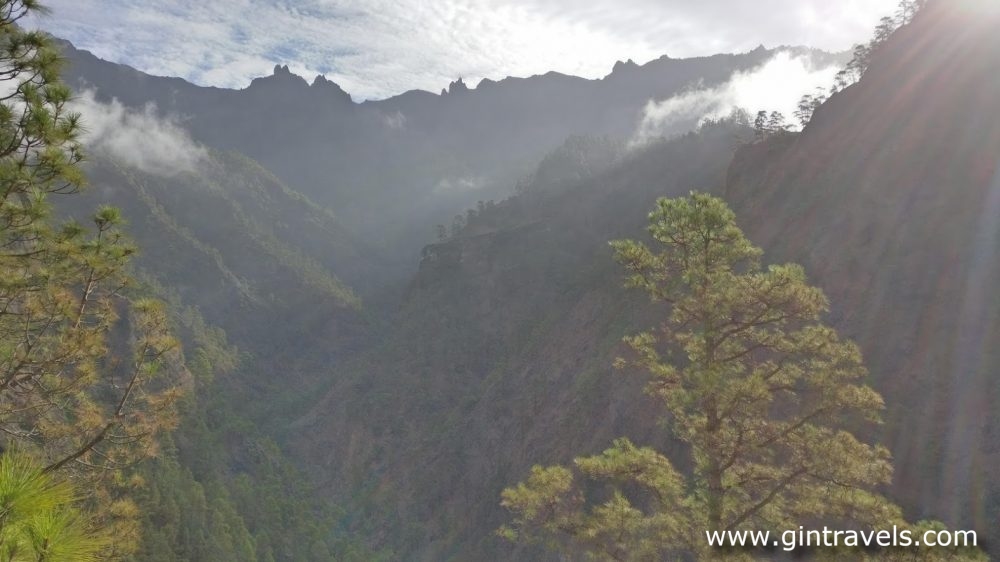 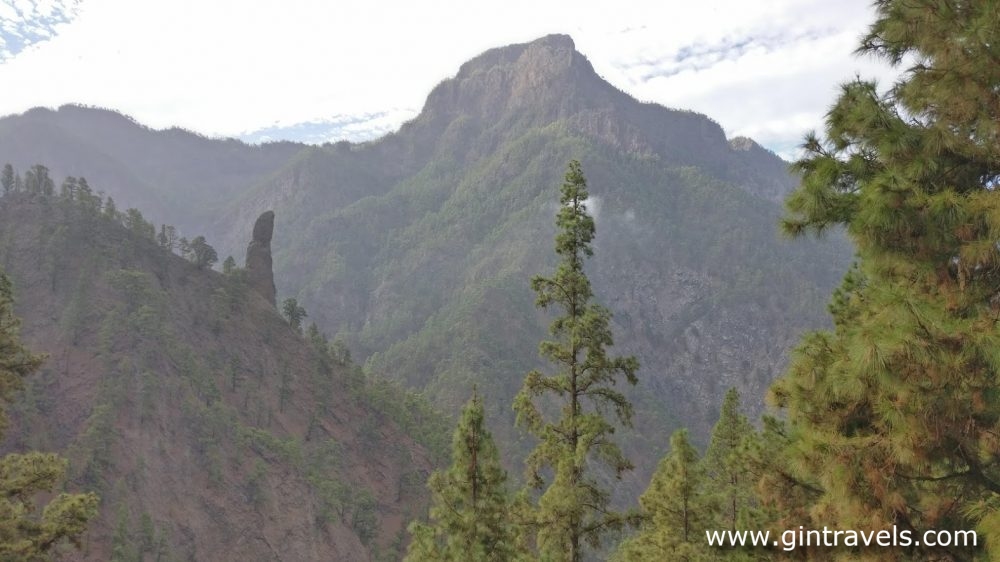 At some point got tired taking pictures and just enjoyed the views going down. Also because had to watch where I was going as in some places it was quite steep and spikes on the road, so very easy to slip as I did the previous day. 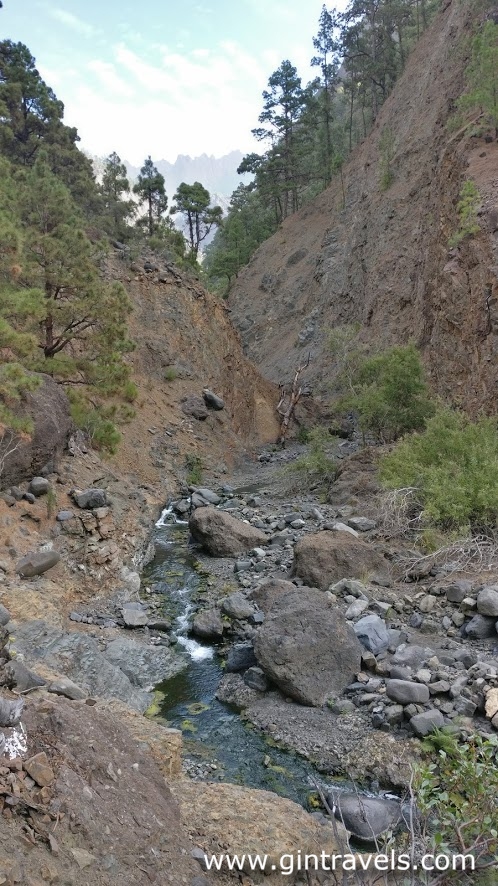 The road in one place split into two: one for regular hikers and another for experienced only. Two went one way and we two the experienced hiker’s one. It was a bit scary I must say as the road was so narrow and you could see steep edge going down. Basically that is the path we were walking through below. 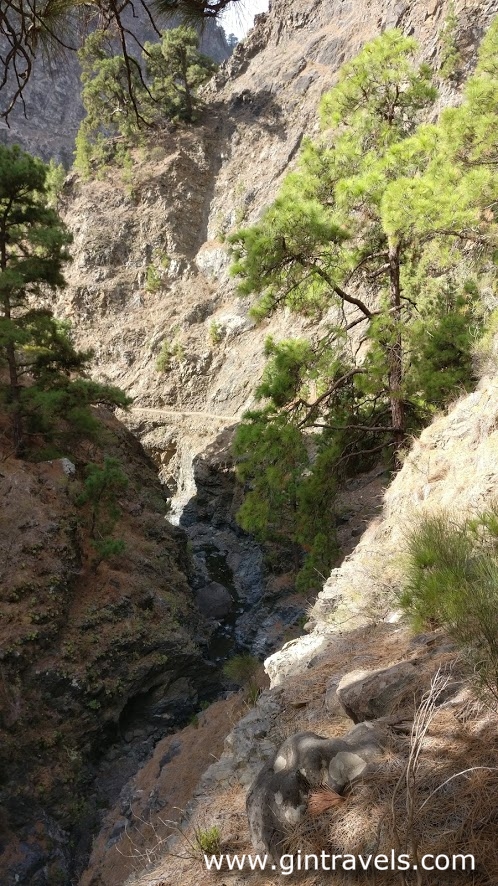 We’ve all got reunited after around 500m walking that path.

Once we’ve got down we headed to see the Cascada de los Colores. It always looks super pretty in the booklet pictures!

To get there all you need to do is to follow the yellow stream. Almost like Dorothy following yellow brick path. 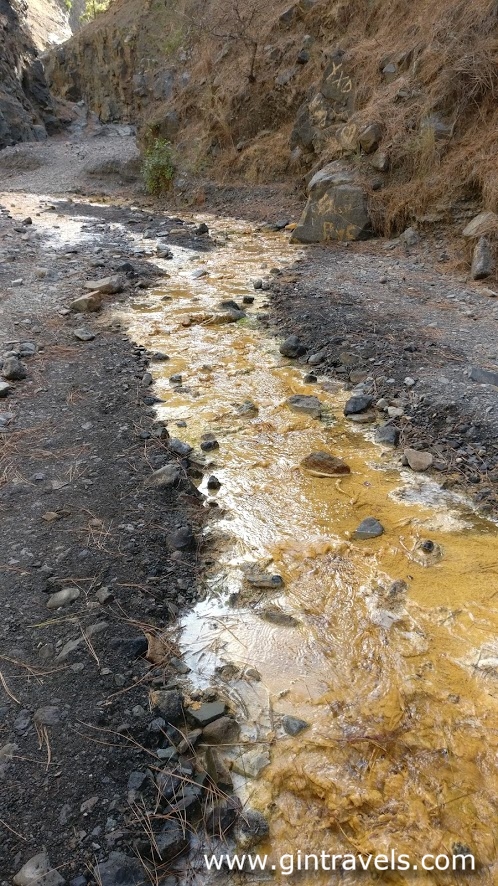 Some tourists using the irony rocks to leave the marks on the rocks all around. A bit sad that people destroying the natural beauty, even though it will get washed away by the winter rain (I hope!).

You could see how much iron is in that water! You can even smell the iron in the water if you touch it. 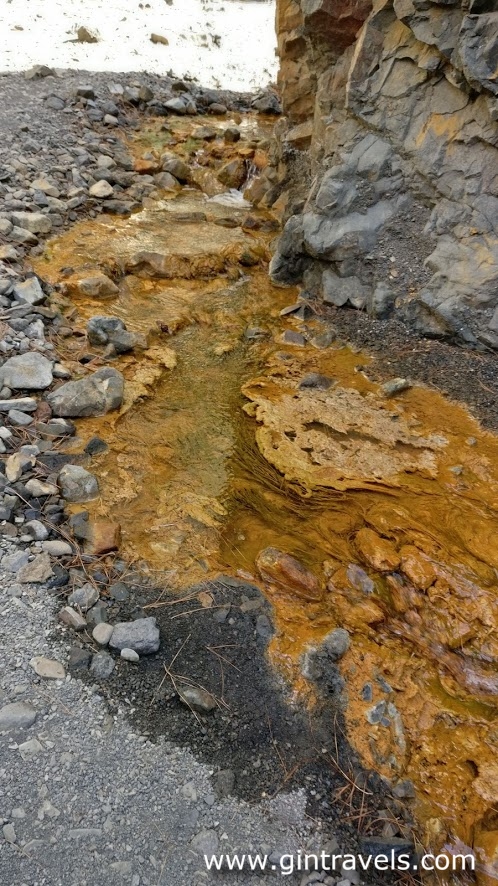 The waterfall wasn’t so impressive as I remember it. It is much better when it is a bit more water (late fall or winter). Last time when I was here we could shower in the waterfall. There was barely any water now. Still spectacular.

Going back to our path (as it was around 500m out of our path out) we turned right to another waterfall, which was very nearby. 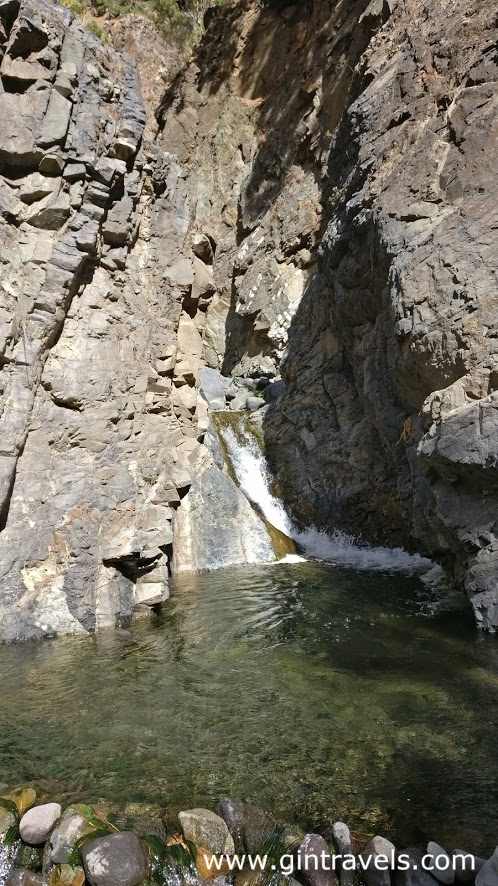 That one had more water. No one wanted to swim as it was still not too hot outside.

We were hiking quite fast to get out from Caldera as everyone was dreading for the beach. 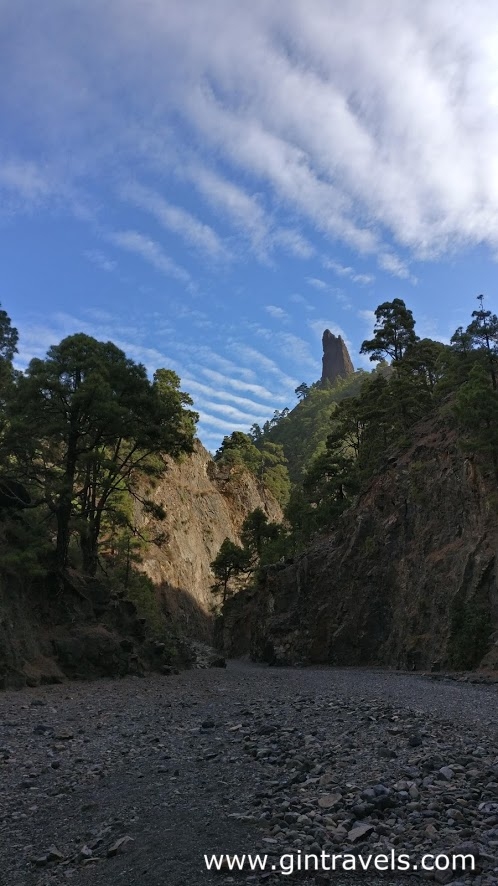 Suddenly we walked into the river. I completely forgot about it. It was next to the water dam. I think there is an abandoned hydro power plant. Not sure if it is in use anymore. We’ve managed to cross that small river without getting wet. Further we just followed barranco to get out of Caldera. The stream was appearing and sometimes disappearing below the sand. In wet season, sometimes it is hard to pass it through without getting wet. Sometimes instead of walking barranco you have to take the harder path of going up and down on the side of it. 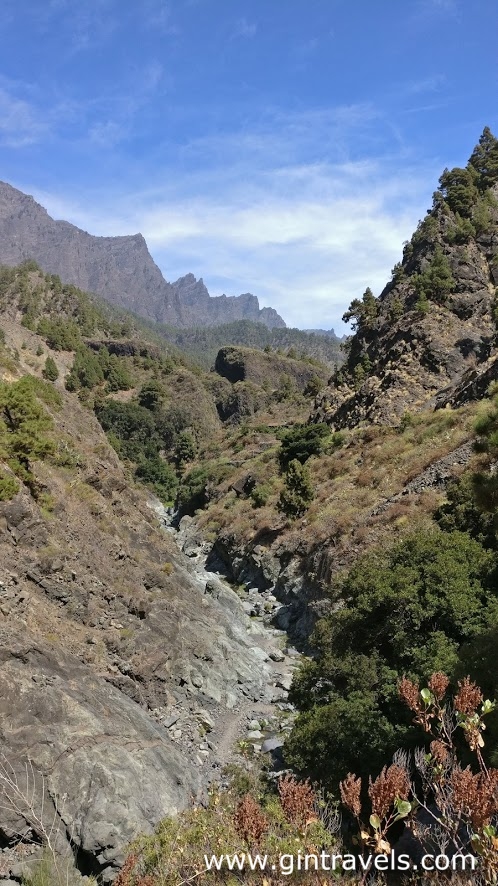 Close to the end it gets quite hard to walk barranco so you have to go up anyway. Nice views from there as you can see the water canals/ Pity I forgot to take a picture of them. I think Los Llanos is drinking the water from those canals. Of course, it gets treated before. Everyone was so happy when we saw the end of barranco and the parking lot! All jumped into the car and we left La Caldera.

We’ve stopped for a short to change the clothes after the hike and drop our hiking boots and headed to the beach at Puerto Naos. Couple pictures of Puerto Naos from our Apartmentamenos de Muralla pool. We were quite hungry after hike. We passed couple of restaurants on the way, but they didn’t impress us. I found that there is a good and cheap Arepa’s place, but we couldn’t find it. In the end we sat the restaurant by the beach facing the sea called Restaurante Las Olas. It was 3:00 pm already.

The food was good. I had a pork with vegetables. A bit more expensive than normal, but still reasonable prices. Total bill for 4 was 47.67 EUR including drinks.

I felt feverish, since got cold at night a bit so had to take Paracetamol. The capsule blends in well with the table cloth 🙂 Since the service was a bit slow, we’ve decided to have a desert elsewhere as we still wanted to go to the beach.

Straight after we went to the place called Beach Bar Puerto Naos for desert.

I’ve got this amazing ice cream with strawberries for 4.90 EUR and a Barraquito for 1.80 EUR. 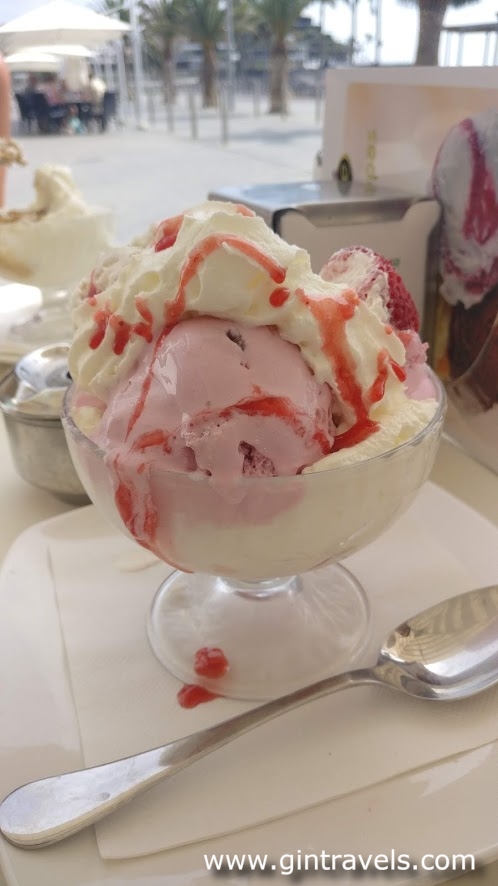 One thing that surprised me in that bar was that legally incompetent people cannot enter it! First I thought it was some sort of discrimination, but later on I found out that there were gambling machines inside, so that is the law for casinos. 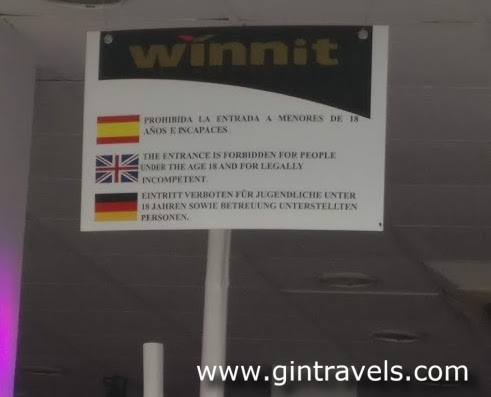 After the desert we headed to the beach.

The beach in Puerto Naos is a bit stony and hard to access the water because of the bigger stones under water. There are small patches of sand though. Good enough. Also couple of chiringuitos – small bars selling drinks by the beach. 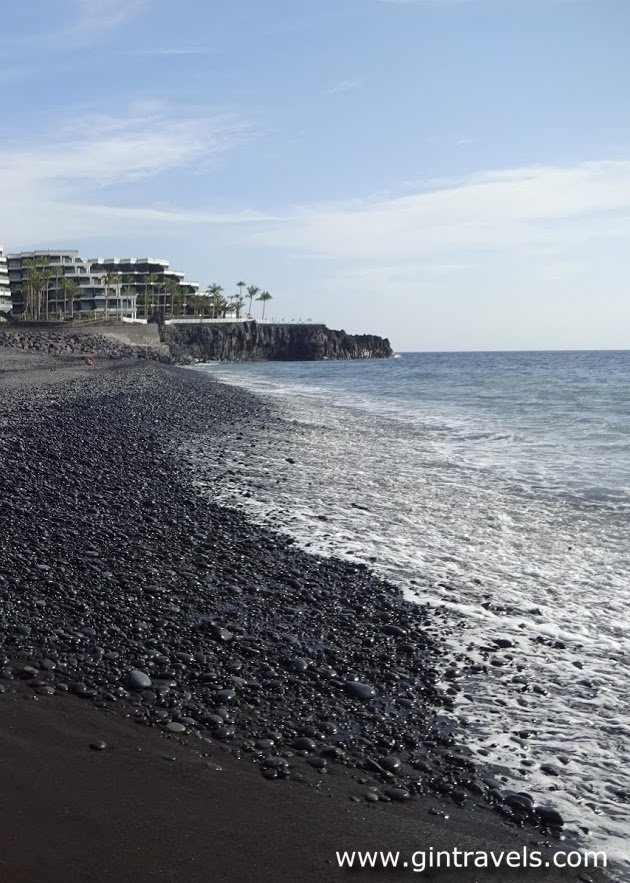